Yesterday, Oregon’s state legislature gave final passage to a minimum wage bill that will move Oregon to the highest minimum wage in the nation. Although not a statewide $15, the partial and extended increase that will move 25 Portland area cities to $15 by 2023 is clearly the result of massive pressure brought on legislators and the business sector by 15 Now Oregon and the growing national movement for $15.Unfortunately,as all the living wage studies show$15 isn’t even enough in Portland right now let alone by 2023, andthe bill’s attempt to account for minor differences in cost of living throughout the state by phasing in three different regional minimum wages accomplishes little other than leaving hundreds of thousands of working people behind. 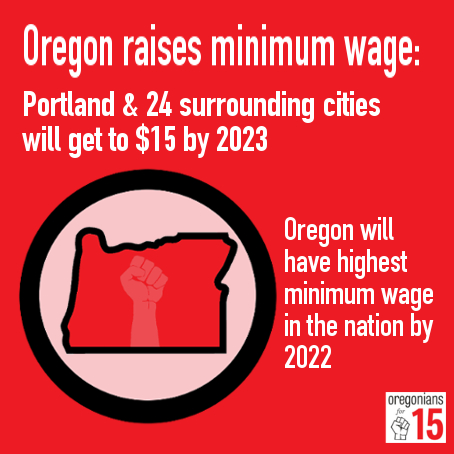 Unfortunately $15 isn’t even enough in the Portland area right now, let alone by 2023. Furthermore, the bill’s attempt to account for minor differences in cost of living throughout the state by phasing in three different regional minimum wages accomplishes little other than leaving hundreds of thousands of working people behind.

Still, it is important to recognize the massive and historic significance for the broader movement in the fact that 25 cities in Oregon are now on a clearly defined path to a $15 minimum wage. We sincerely hope that victory serves to inspire others across the nation to continue to Fight for $15.

We recognize the significance in the fact that Oregon will now move to the highest minimum wage in the nation.

We also recognize the material importance of the fact that half a million low-wage workers and their families here in Oregon will now be getting raises of up to a dollar per hour every year for the next six years, raises that they had no guarantee of prior to the passage of this bill.

It is important to recognize and take stock of these things, recognize them for the victories that they are in and of themselves, and thank 15 Now Oregon, 15 Now PDX, Jobs with Justice, PCUN, OSEA, OFNHP, Laborers Local 483 and all the other organizations, low-wage workers, labor activists, and small business owners across the state who have poured their time and their effort, their hearts and souls into this struggle for the past two years. To all of you, we say thank you and we appreciate you.

At the same time, we also have to recognize that the new minimum wage plan for Oregon is a far cry from the statewide $15 minimum that Oregonians have been demanding for those past two years.

Aside from leaving most of Oregon behind at a lower minimum wage without restoring local control over minimum wage laws, perhaps the most glaring deficiency in the recently passed bill is that despite moving Oregon toward the highest minimum wage in the nation, it does not even begin to create a living wage anywhere in our state. It doesn’t create minimum wages that allow low-wage workers and their families to be self-sufficient. According to the Self-Sufficiency Standard for Oregon, a single parent needs anywhere from $15-23 per hour in one half of Oregon's 36 counties in order afford the basics for her family. That study was conducted in 2014, not in 2023. Yes this bill does increase the minimum wage, but it is too low and too slow.

As this bill is clearly inadequate in providing a living wage for working Oregonians, we will continue collecting signatures for IP 41, the statewide $15 ballot initiative that phases in over three years, by 2019. At the same time, in light of the legislative bill’s passage there are a number of factors that need to be considered in honestly determining our continued viability for the 2016 election. Over the next month we will be having conversations with the members of our coalition and other stakeholders to examine the shifting political landscape around the minimum wage issue in Oregon. This landscape is still rapidly shifting. For example, it has already been announced that a new "bipartisan" minimum wage bill is being introduced to try and roll back the bill that just passed along party lines. Through these discussions it is our hope to discern the most strategic path forward for the continued struggle and agitation around a living wage and other issues of importance to Oregon’s working class.